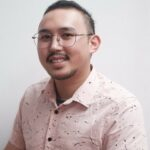 Lawrence Serafico
Lawrence is a MOBA whizz who primarily enjoys games with cryptic lore and an overwhelming amount of in-game text. When Lawrence isn’t writing about games you can find him listening to a podcast, reading a book, or attempting to cook a foreign recipe he saw online. He’s also involved with local theatre productions and is willing to stay up all night writing meticulous feedback on your manuscript.

Item builds are essential to each and every champion in League of Legends. Items complement their specific skillset and playstyle and will even determine their role in the game. The whole reason for farming acquiring gold is to buy items to help you overpower your opponents and destroy their nexus.

Items are built by purchasing the required components. Basic items are bought as is, while more complex ones need different items to create. More potent items are classified as Epic, Legendary, and Mythic. Mythic items are often game-changing; thus, they cannot be built with another one from the same class. Furthermore, mythic items typically provide a mythic passive, which is why they’re so sought after.

Sunfire Aegis is one of the mythic items in League of Legends. This item is suitable for durable champions who can withstand damage from the opposing team. Moreover, Sunfire Aegis burns opponents in a small area around the user, so it’s perfect for those who want to stay in the center of the fight as long as possible.

Sunfire Aegis isn’t compatible with soft and fragile champions that chuck spells on the outskirts of the fight. But, durable champions with great defensive stats can effectively use the item while charging in the frontlines, like typical top laners, tanky junglers, and even a few supports.

In this article, we will talk about more Sunfire Aegis’s fundamentals and champions who are suitable for this item as well as the finer details of the item. 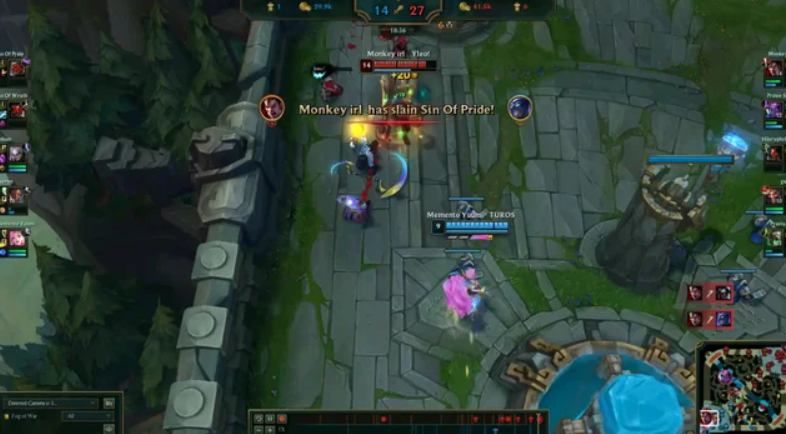 Sunfire Aegis is a mythic item that gives the Immolate and Flametouch passive. It’s excellent for tanks who thrive in extended fights because you can apply maximum stacks against enemy champions. It also buffs up other legendary items with health and valuable tenacity.

What is Sunfire Aegis?

Sunfire Aegis is a defensive item that works well with champions that are built to tank and duke it out in the frontline. Also, it is a mythic item just like the Divine Sunderer.

Champions are limited to only one mythic item in their inventory. Like every other mythic item that exists in the game, you cannot build another one if you have already decided to go with Sunfire Aegis. This item grants your legendary items 5% tenacity—a stat that reduces the duration of the stun and crowd control effects— while giving you a 50 health bonus and 5% slow resistance. Hence, fighters champions would love these benefits.

How to Build Sunfire Aegis 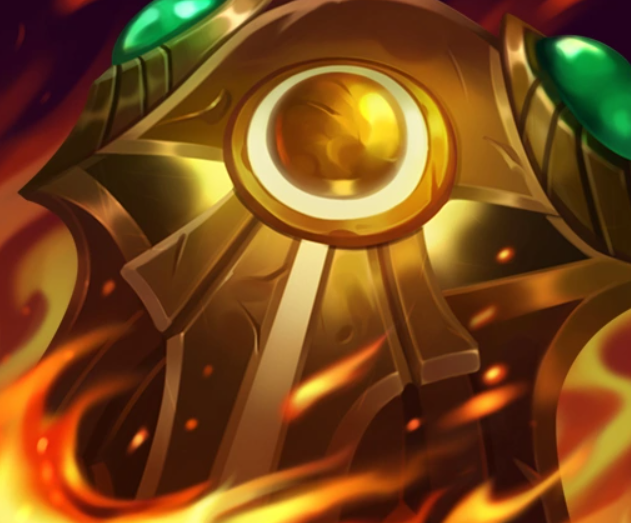 With the Sunfire Aegis recipe costing 700 gold, the whole item will charge you 3200 gold. If you decide to sell it, there will be a deduction on its original price, and you’ll get back 2240 gold.

Which component to build first depends on the state of your game. If you’re able to secure an early advantage, you should build Bami’s Cinder to further ruin their game. But, if you’re falling behind and need the extra armor and magic resistance Aegis of the Legion provides, then build that first.

Some champions like Ornn would greatly benefit from the burn effect from Bami’s Cinder regardless of how their lane is going. In general, building Bami’s Cinder first is better since it is way cheaper than Aegis of the Legion. The 300 gold difference is a lot in the early stages of the game. Additionally, the Immolate effect speeds up your farm for the last component of the item.

Sunfire Aegis’s stats are best suited for tank champions. Based on the stats given from this item, Sunfire Aegis is 87.4% gold efficient since it provides 20 ability haste, 350 health, 35 armor, and 35 magic resistance. This item synergizes well with champions with high health and armor, and also it is much more practical than other mythic items.

Sunfire Aegis contains the Immolate unique passive effect. Receiving or dealing damage triggers its effect, dealing magical damage by 12-30 plus 1% of your bonus health every second to enemies within a 325 radius around the user. Also, Immolate destroys minions when they are low enough.

Enemies affected by this passive effect will allow the passive to stack up to 6 times for 12% within 5 seconds as long as there are nearby enemies around you. It reaches its peak at 72% bonus damage when fully stacked.

Correspondingly, Sunfire Aegis has another unique passive called Flametouch. Once you reach maximum stacks, this passive causes your auto attacks to explode.

Flametouch deals your current damage Immolate stack for 3 seconds on every basic attack. If you manage to get this in the fight, it’s lethal for the enemy team.

The Most Common Sunfire Aegis Users 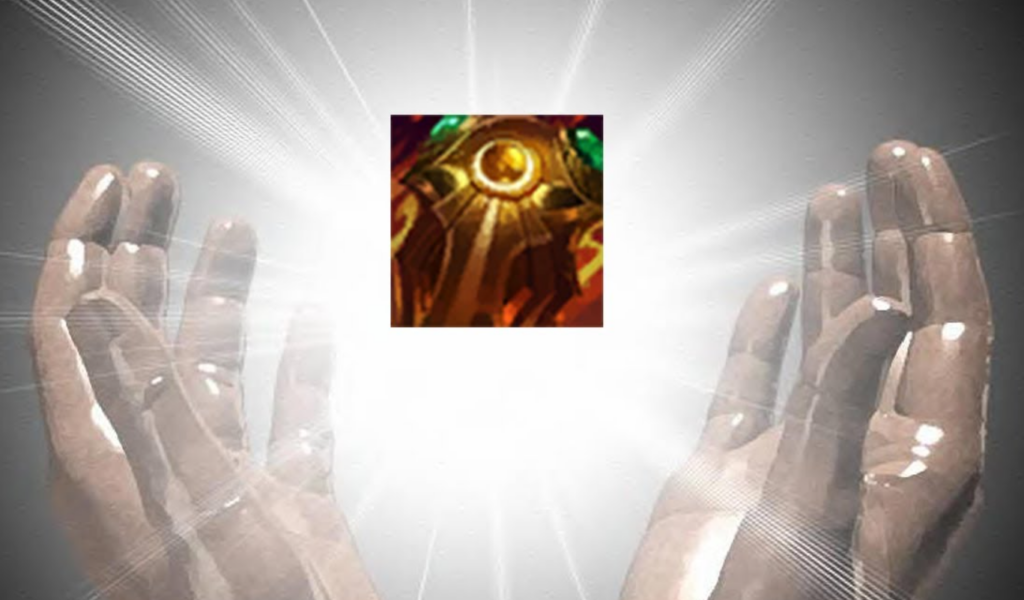 There are several characters that can benefit from this particular item. In general, tanks and a few supports can stay long in the fight long enough to reach max stats. In addition, some champions are so tanky that they can reliably trigger Flametouch in every battle.

The best example of this is Shen. Shen’s abilities grant him a gap closer and the sustainability to fully utilize Sunfire Aegis. His third ability, Shadow Dash, dashes towards your cursor, taunting champions and monsters hit in his path. By doing this, you’ll keep opponents near you for far longer, applying more Immolate stacks on them.

Shen can also use his passive Ki Barrier to make him last longer in the fight since it gives him shields. Twilight Assault, his first skill, also slows down enemies. Champions who are durable with sustain and crowd control are perfect candidates for Sunfire Aegis. Enemies who are slowed and exhausted will have a bad time against someone with Sunfire Aegis.

Other champions such as Zac, Amumu, and Poppy are great with Sunfire Aegis as your mythic item. They can stick to targets and survive long enough to apply Sunfire Aegis’ passive. Poppy, in particular, benefits from Flametouch since she can also hit hard. Ornn is an exceptional candidate for Sunfire Aegis.

Ornn is a very tanky champion with a lot of crowd control abilities in his kit. And the best part is you can upgrade your Sunfire Aegis into Forgefire Crest because of his whole blacksmith theme. When upgraded, the base stats of this Forgefire Crest increases compared to its predecessor. Forgedfire Crest now provides 500 health, 25 ability haste, and 45 armor and magic resistance.

What these characters have in common is sustain and crowd control in extended fights. They love to charge straight into the first and soak damage intended for their softer teammates, demanding attention from the enemy ADC’s (Attack Damage Carry) and mid carry. Sunfire Aegis enables them to do their thing through solid defensive stats and boost other legendary items.

Sunfire Aegis and Other Items 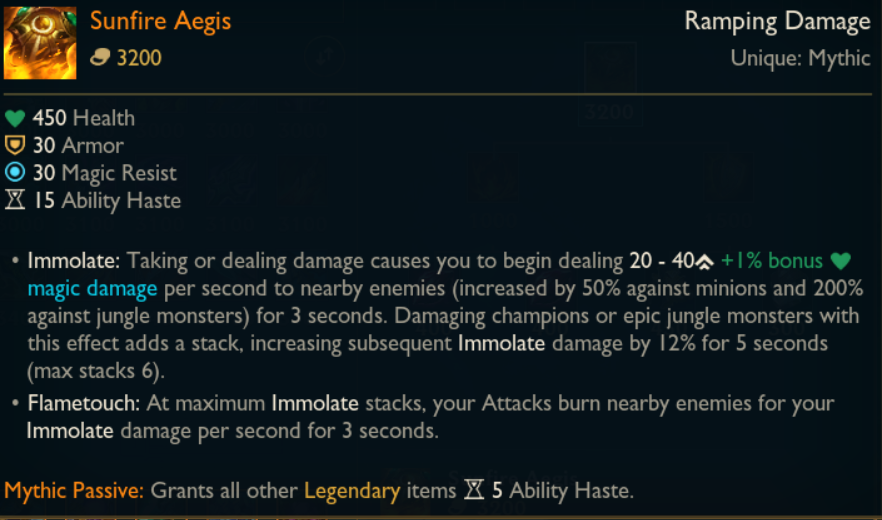 Demonic Embrace is a great item to pair with Sunfire Aegis to deal more damage. Dark Embrace’s unique passive, Dark Pact, allows the champion to acquire magic damage equal to 2% of your bonus health. So having Demonic Embrace with Sunfire Aegis equipped is really good for champions with a large health pool. Both items benefit from more health, and they dispense even more damage because of it.

Sunfire Aegis is usually compared to Frostfire Gauntlet since it’s also another mythic item fights and tanks love to buy. They even share the same Immolate passive since they’re both built from Bami’s Cinder.

The big difference is Frostfire Gauntlet’s second passive. Snowbind enhances your basic attack with ice magic, creating a frost field around the target when hit. This deals magical damage and slows targets with the initial hit. Additionally, enemies who stay inside the frosted area are slowed.

Sunfire Aegis has a significant but subtle passive, great for extended fights. But Frostfire Gauntlet is better to burst down enemies as well as help with crowd control. The extra health gained from its passive makes it the more suitable choice against AD (attack damage) heavy compositions. It also depends on your champion and playstyle, as both these items are generally interchangeable, and it usually depends on which Riot hasn’t nerfed that patch. 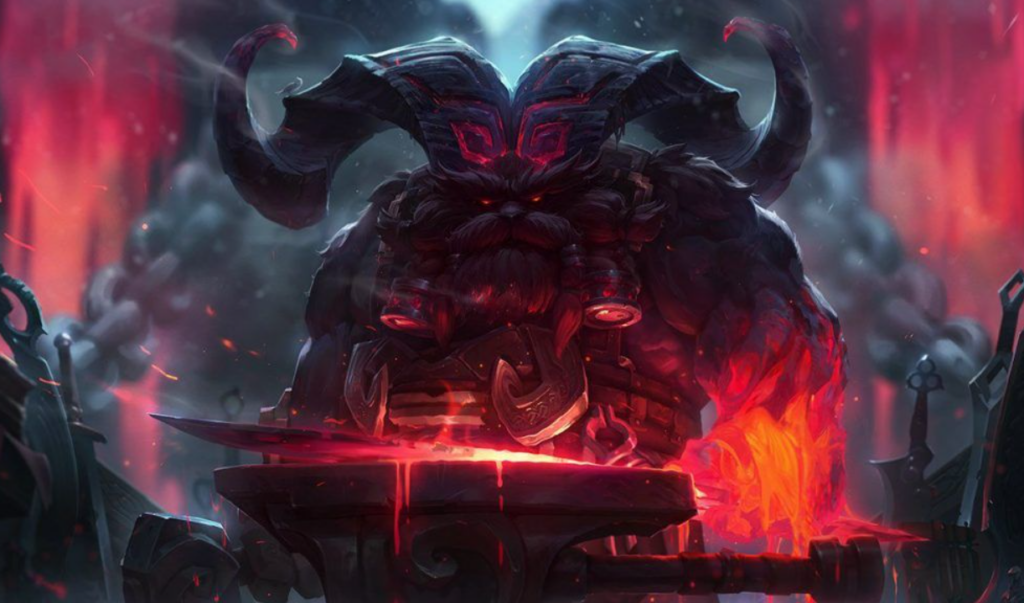 There are assorted facts that might help you understand the full capacity of Sunfire Aegis:

Question: What is Sunfire Aegis

Answer: The Sunfire Aegis is a mythic defensive item that allocates several benefits. This item is best suited with tanks that are capable of enduring incoming attacks, as well as protecting other teammates. It’s best known for its Immolate and Flametouch passive, burning nearby enemies and enhancing basic attacks. In addition, its mythic passive provides 5% tenacity, slow resists, and 50 bonus health with each legendary item equipped by your champion.

Answer: Sunfire Aegis has been hit by a lot of nerfs since its rework, but I might say this is still viable on some situations and champions. Although players often pick other mythic items with almost identical properties, such as Frostfire Gauntlet and Turbo Chemtank.

Question: How does Sunfire Aegis work?

Answer: Sunfire Aegis works by nourishing your legendary items in your item slots. This item contributes of each legendary items 5% tenacity, slow resistance, and 50 bonus health to your character.

In addition, Immolate damage stacks up to 6 times. Once it reaches maximum stack, your basic attack will most likely explode around you burning them in the process if the enemies are within your range. This passive effect is called Flametouch.

Sunfire Aegis is powerful with champions that feel like an unbent tower. Preferably, you should build this at the beginning to easily clog them with the item’s bonus health, armor, continuous damage, and sustainability.

This item is most effective with tanks and it is better against damage-based champions, especially to burst damages. But you should accompany it with other legendary items that cooperate with the Sunfire Aegis assets.

To completely grasp the dimensions of Sunfire Aegis, you need to always remember to understand its uses and purposes. Like any other MOBA game, you should consider applying synergies to your inventory as well as to your stats and kits to the character you want to use to reach its full extent. Otherwise, it will not be as effective as you expected.

To sum up everything, the Sunfire Aegis is guaranteed as one of the best tank items in the game. Not only does it provides pretty amounts of defensive properties that supplement top and support roles, but it is also effective in performing in the offensive state. Furthermore, when you want to use a more sustainable tank, The Sunfire Aegis is the one you want to wield on the battlefield.